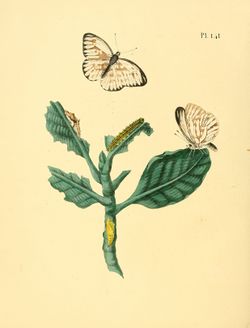 The caterpillars attack Brassica crops or related plants in tropical and subtropical regions of the Americas. The damage can be extensive, including defoliation and substantial crop losses. The adults can migrate for more than 100 km to find suitable breeding areas.

The caterpillars are typically controlled through multiple applications of pesticides during a growing season. However, attempts are also made to find resistant cabbage cultivars.

The wingspan is between 6 and 8 cm. The wings are white, sometimes slightly yellowish or with darker patches. The wing margins are dark brown to black. Various subspecies have been described which differ in their geographic distribution and pest status. E.g. the form Ascia monuste orseis is considered a serious pest of cabbage in southern Brazil.