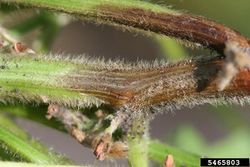 The oomycete causes an important soil-borne soybean disease which is found in most areas where this crop is grown, specially on poorly drained soils. Yield losses can range between 10 and 40%, but can also reach complete crop losses in susceptible cultivars (Zhang et al., 2013). The symptoms include root rot, dark brown discoloration of the stems as well as yellowing and wilting of the leaves. Resistant cultivars are mainly used for managing the disease. P. sojae has many pathotypes and various resistant genes have been identified against them.

The lemon-shaped sporangia are about 40 x 30 µm large and release more than 20 zoospores. The thick-walled, spherical oospores have a diameter of 30-40 µm. They are the overwintering stage of the pathogen and may stay dormant in the soil for years.