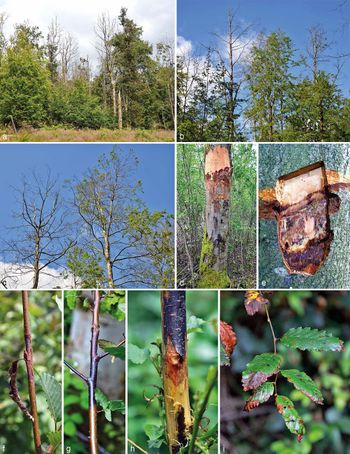 Phytophthora pseudosyringae symptoms on Nothofagus spp. in the U.K. (click on image to enlarge it)
Author(s): B. Scanu
Source: Persoonia 2018, vol. 40, p. 203

This oomycete is found in Europe and North America and causes diseases on various forest trees. For example, in continental Europe it has caused root and collar rot on trees like beech and alder.

In the U.K. it has been found causing bleeding cankers and lesions on root flares on beech and hornbeam as well as bleeding cankers on stems and branches on Nothofagus obliqua. In the latter case the disease has resulted in extensive dieback and mortality of Nothofagus trees.

P. pseudosyringae has also been reported from North America where it is causing aerial infections on foliage and twigs or stem cankers on trees like Notholithocarpus (tanoak), Umbellularia and oak.