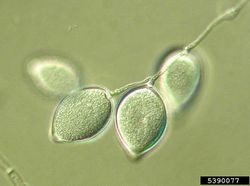 The oomycete is widespread in the tropics and subtropics causing rot diseases on crops like coconut palms (budrot and fruit rot), cacao (canker, black pod, leaf blight, root rot), citrus (brown rot) or papaya (blight). Other crops can also become infected. The symptoms depend on the host and which part of the plant is infected. They range from budrot of palms where the growing point is infected and the palm is already killed by the time the first symptoms appear, to root rot, stem canker, fruit rots and seedling blight. The pathogen disperses by rain splashes, through water or through contaminated agricultural tools. For control, improved drainage, sanitation (removal of infected fruits), intercropping with a non-host and resistant cultivars are recommended. Trunk injection of phosphoric acid, phosphite or phosphonate has been found to be effective.

The sporangia are basically egg-shaped, but narrowing in the apical half and terminating in a papilla at the tip. They form on short pedicels (3-4 µm), detach easily and are about 30-60 x 25-40 µm in size. They can germinate directly or release zoospores in water.

Chlamydospores can be formed, are spherical and about 30 µm in diameter. Sexual reproduction and the formation of oospores requires the contact between the mating types A1 and A2. Oogonia are about 30-40 µm in diameter.