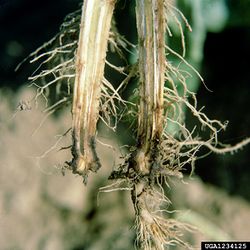 The oomycete is an important soil-borne pathogen with a worldwide distribution. It causes root, fruit and crown rot, blight and cancer diseases on various crops like tobacco (black shank), green pepper, tomato or citrus. The infection can already start with root rot and damping-off in the seedling stage and infections of susceptible cultivars might result in total losses, e.g. in tobacco or tomato crops. From the roots, the pathogen spreads into the stems, leaves and fruits, causing yellowing, wilting and necrosis. It disperses through contaminated seeds, tools or irrigation water. For control, sanitation (removal of infected plants), proper drainage, resistant cultivars and fungicides are recommended.

Sporangia are lemon-shaped to pear-shaped, 20-50 x 15-40 µm in size. They can germinate directly or release about 30 zoospores each. Chlamydospores are spherical, around 20-30 µm in diameter. Sexual reproduction and the formation of oospores usually requires the contact between the mating types A1 and A2. However, homothallic isolates have been also described. Oogonia have a diameter of around 30 µm.