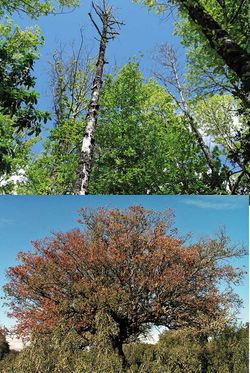 This oomycete is found mainly in warmer regions and infects a large variety of plants, predominantly fruit and forest trees. It is soil-borne and spreads easily in wet soil. The zoospores are mobile in water and infect the root tips. Root rot leads to wilting, chlorosis, stem necrosis, die-back of branches and often plant death. Trees commonly infected include avocado, eucalypt, oak, chestnut and Banksia.

The pathogen disperses through water or by human transport of infected plants and contaminated soil. Chlamydospores and oospores may persist in the soil or in plant debris for up to 6 years. Trunk injection of phosphoric acid, phosphite or phosphonate has been found to be effective for control.

The sporangia are pear-shaped or egg-shaped and produce 10-30 zoospores. Globose chlamydospores are also common and have a diameter of 30-50 µm. A1 and A2 mating types have been described, however, homothallic isolates are also known. Oogonia are spherical, about 20-60 µm in diameter and form a thick-walled oospore.