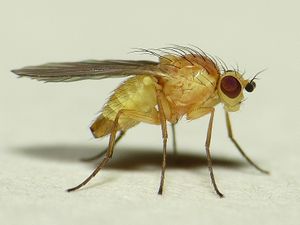 This is a large genus of leafminers which has a wide distribution and is common in temperate regions. It contains more than 500 species, many of which are specialized on one or a few related host plants. Several species are considered pests of crops like the garden pea leafminer, Phytomyza horticola, and the cabbage leaf miner, Phytomyza rufipes. Others infest forest trees, like the holly leafminer, Phytomyza ilicis. The larvae often produce long, winding mines and pupate in the mines with the anterior pair of spirales protruding through the leaf surface.

For a taxonomic review of the genus see Winkler et al. (2009). These authors have also revised the polyphyletic genus Chromatomyia and concluded that it is part of the genus Phytomyza.