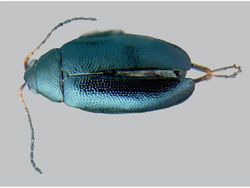 The flea beetle is native to temperate areas of Eurasia and has been introduced into North America in the 1920s. It attacks crucifers like cabbage and canola. The damage is mainly caused by the adults which make small holes in the leaves. Seedlings may be killed during the attacks and plants become stunted. In 2013, about 80% of the canola seedlings were damaged in many parts of Montana. Between growing seasons, they feed on volunteer canola and other Brassica species.

The adult is about 3 mm long, shiny metallic blue-green and lacks any pale markings. There is one generation per year. The eggs are laid at the base of the plant and the larvae feed on the roots. The development from egg to adult lasts around 3 months. The young adults emerge from the soil in August - September, feed and hibernate in the soil or leaf-litter to re-emerge in spring, when they feed again on seedlings before laying eggs.

For control in canola, insecticidal seed dressings and pesticide applications to seedlings are used. The economic threshold is about 25% feeding injury to cotyledons and the first true leaves.