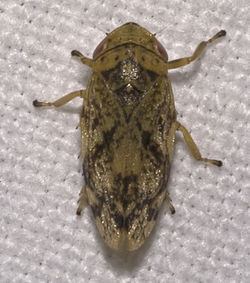 Philaenus spumarius is regarded as a polyphagous, agricultural pest, attacking grapevine and various other crops like alfalfa, berries and fruit trees. It has been also implicated as a vector of Xylella fastidiosa on olives in Italy (Cornara et al. 2017). P. spumarius is widely distributed and has been originally described under more than 50 names, due to its different colour forms. It is now regarded as a highly variable species, both in colouration as well as in the habitats it occupies and in the choice of host plants for breeding. The genetics leading to this variation are of interest to biologists.