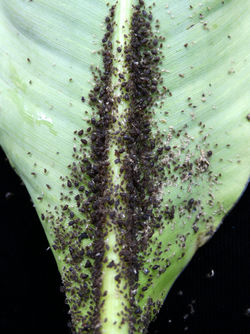 This aphid infests bananas in many parts of the world. It was originally described from the Reunion Island, but probably originates from the south-east Asian and Pacific regions. It can reach high densities on banana plants, but is more important as a vector of the destructive banana bunchy top disease.