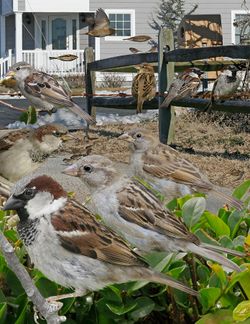 Passer domesticus - foreground: male with 2 females behind it (click on image to enlarge it)
Author(s): Richard Crossley
Source: Wikimedia Commons

The house sparrow is native to Europe, parts of Asia and northern Africa but invasive in America, Sub-Saharan Africa and the Australia-Pacific region. It can be a pest of cereals in some countries, but is also a natural enemy of insect pests.

Invasive populations (see distribution map below) spread quickly and are a threat to native bird species. For example, the house sparrow was introduced into the United States in the 1850s and is now found in all parts of North and Central America.