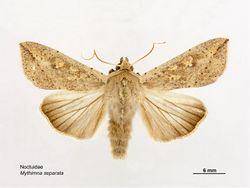 The genus of Mythimna contains more than 300 species of medium sized moths (wingspan often between 30 and 40 mm). Several are known as armyworms (see also the genus Spodoptera) and are pests of gramineous and other crops in tropical and subtropical regions. Like several Spodoptera species also the adults of some Mythimna species can form migratory swarms that fly over considerable distances. The most important species is the rice armyworm, Mythimna separata which attacks rice, maize and grasses, among others, in Asia. The caterpillars are nocturnal. They hide during the day and start feeding at the onset of darkness.