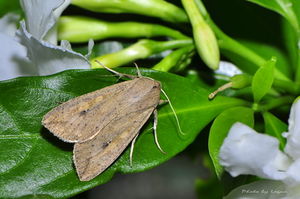 This species of armyworm is an important, migrating pest of maize, rice (ears are often cut off) and other cereal crops in south-east Asia and Australia. In China, it migrates four times per year and can cause serious damage when it invades cereal fields during these migration events. For example, the first migration in China occurs in spring from southern areas to northern and central wheat fields. Maize and rice can be damaged during subsequent migrations.

The adult moths have a wingspan of around 4-5 cm. The forewings are yellowish grey. The caterpillars are greyish with lateral stripes, and the frons have an 'A' mark.