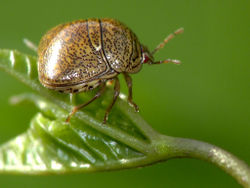 This plant-sucking bug is native to Asia (apparently originating from Japan) and has been accidentally introduced into North America (first recorded from Georgia, U.S.A. in 2009). In Asia, it is regarded as an occasional pest of vegetables. In North America it has developed into an ecocomical pest of soybean, weakening stems, petioles and leaves through its feeding activity. Average yield losses were estimated at 20% in 2010 and 2011.

M. cribraria is also a nuisance pest and attacks other legumes and fruit trees. The insect will excrete a liquid as defense which creates a burning sensation on bare skin and also leaves a red welt. It aggregates on building walls in autumn in search for a hibernation shelter. In Georgia, it is common on Pueraria montana (a serious weed in that region) and can have a significant impact on its growth. From kudzu it often migrates to soybean.

For reviews see Lahiri & Reisig, 2016 and the respective page in BugwoodWiki.