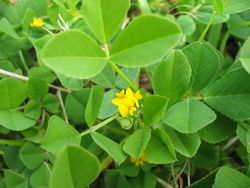 The genus of Medicago contains around 100 species of leguminous plants. It is native to Europe, Asia and Africa, but now has a worldwide distribution. Best known is the fodder crop Medicago sativa (alfalfa or lucerne). However, several species are regarded as agricultural weeds like California burclover, Medicago polymorpha. This page deals with the weedy species.

The plants are usually small and clover-like. Typically the flowers ae yellow and the fruits have a spiral form and are often covered with spines or prickles.