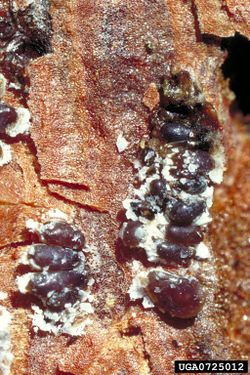 The scale insect is native to the Atlantic regions of southern Europe and northern Africa. It was introduced into south-eastern France in the 1950s and spread to Italy in the 1970s. It infests exclusively the bark of the maritime pine (Pinus pinaster) and can be seen as cottony white ovisacs within bark crevices. Attacked trees are weakened, with reduced growth, extensive resin production and yellow and reddish needles. In France alone the outbreak involved 120,000 ha of pine forests. The infested trees are also predisposed to attacks by wood boring insects like bark beetles, long-horned beetles or brupestids which may kill the tree subsequently.

Control efforts are directed at preventing the further spread of the scale and investigating the natural enemies in its native habitat. The scale has one generation per year with adults appearing during autumn and winter and the nymphs go into a resting period during higher temperatures. The mature female is elongated approximately 3-5 mm long.