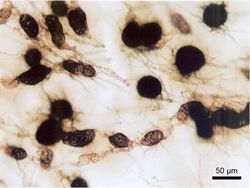 The fungus is widespread in warmer regions and causes an important root and stem disease on a large number of host plants like legumes (e.g. soybean, cowpea, bean), maize or vegetables (tomato, pepper). The disease incidence can reach 50% and result in significant crop losses. For soybean, the estimated annual losses in the United States alone range from 0.6 to 0.8 million metric tons. The disease develops under warm and dry conditions. The infected roots and stems turn black causing wilting and chlorosis. Other symptoms include rots of pods and seeds, early maturation, or incomplete pod filling. In maize, the vascular system of the stalks turn black. Seedling blight might develop if the infection occurs early in the season.

The main source of infections are the soil-borne and germinating microsclerotia. However, the infections often remain symptomless until suitable environmental conditions or plant maturation initiate the necrotrophic phase of the disease. Microsclerotia are then produced in large quantities which disperse during decay of the plant tissue and survive in the soil for several years. Infected seeds can also spread the disease. The disease can be managed to some extent by cultural practices like crop rotation, organic amendments, seed treatment and genetic host resistance.

The microsclerotia are black, roughly spherical and around ½ mm large. Pycnidia can be also produced in nature and in cultures. They may be common on certain crops like beans but rare on others. Pycnidia are black and approximately globose, 100-200 μm in diameter. They release elliptical and unicellular conidia, about 20-30 x 8-10 µm large.