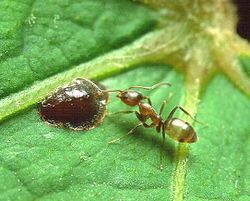 This ant is native to northern Argentina and southern Paraguay. It has invaded many other regions with a Mediterranean-type climate and now has an almost world-wide distribution. The ant has become a serious urban pest in the invaded areas. It readily enters houses in search for food and water. In some areas, most of the requests for pest control services in houses are initiated after infestations by the Argentine ant. L. humile also tends aphids, scales and mealybugs, protects pests in the process, and has become a crop pest. For example, in California, it is a problem in citrus by promoting the establishment of various sucking pests like the citrus mealybug, Planococcus citri (e.g. see Greenberg et al., 2006). In addition, it suppresses native ants.

Part of the success of the ant has been attributed to the fact that individuals from different nests rarely compete with each other and even exchange individuals and resources (polydomy). Therefore, the nests can be regarded as being part of "super colonies" which can extend over hundreds and thousands of kilometers.

On the other hand it has also been also reported as a useful predator of pest insects. Toxic baits (e.g. sugar and boric acid) are often used as a control method, but this fails to kill the queens.

The ants build nests in the ground and typically form unicolonial colonies containing many queens. During the winter, the colonies contract in size, so called "winter nests". Female workers are about 2½ mm long, males about 3 mm. The development time from egg to adult worker is about 3 months.