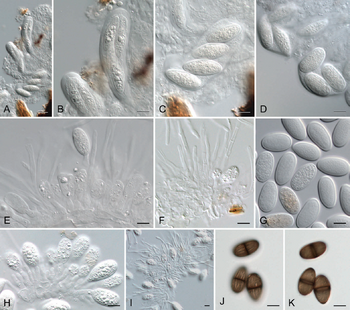 The fungus has a worldwide distribution in tropical and subtropical regions and causes various dieback, canker, rot and blight diseases, e.g. on avocado (stem-end rot), breadfruit or citrus (Rio Grande Gummosis). It is often regarded as a pathogen of the vascular system which can result in plant death. Stored fruits can be also infected. Spores disperse through the air or by rain splashes and infect plant tissue through small wounds.

The fungus forms dark brown conidia which are thick-walled, egg-shaped to elliptical, have 2 cells when mature and are approximately 25 x 13 µm large. In the sexual stage it forms dark-brown ascomata producing ellyptical ascospores which are about 30-35 x 11-14 µm large.