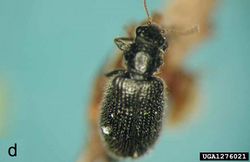 The beetles lay eggs in the spring and the larvae feed on adelgid eggs. The mature larvae then drop to the ground for pupation. The adults undergo a diapause period in the summer and emerge from the soil in autumn. They feed until spring on adelgid nymphs. The adults are about 3 mm large and the development time from egg to adult, through 4 larval instars, is about 6 weeks.