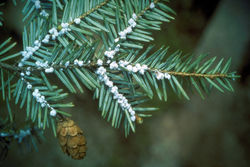 The insect is an important pest of hemlock (Tsuga canadensis and Tsuga caroliniana) in north-eastern North America, where it is believed to have been introduced from Asia (first record 1951). It is also found in north-western North America, where it does not cause outbreaks and feeds on Tsuga heterophylla. Infestations can be recognized by the woolly cover of the aphid-like insects on the hemlock twigs. Outbreaks in eastern North America typically result in needle loss and tree mortality with most trees dying between 10 and 15 years after the initial infestation.

In its native range (parts of Asia), A. tsugae feeds on both spruce (primary host) and hemlock (secondary host). However, in eastern North America, suitable spruce species are absent and the populations only reproduce parthenogenetically on hemlock. Although winged forms are still produced, these do not propagate and dispersion occurs mainly through the wind by the young larvae.

The adult is dark-purple in colour and 1-1½ mm long, about 3 mm including its woolly cover. The adelgid produces a large amount of the woolly cover (around 40% of its biomass) which apparently functions as a physical and chemical defence system against natural enemies (Jones et al., 2014).

For more details see Limbu et al. (2018) and the BugwoodWiki.