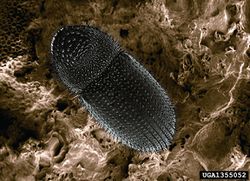 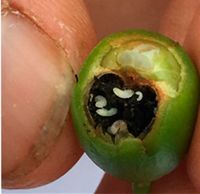 The beetle has a world-wide distribution in coffee-growing regions and is an important pest of that crop. The beetles breed inside the developing coffee berries and reduce the yield and quality of the coffee. Attacked berries often drop to the ground before they are harvested. In Jamaica, the yield losses due to this pest have been estimated at 20% for the 1980/81 season. Infestation levels of more than 50% have been reported from several countries.

H. hampei is of African origin and has spread to South America in the 1920s and to Central America in the 1970s. Around 80 countries are affected now. The beetle disperses through the shipment of green coffee berries. The development from egg, through 2 larvael instars to adult lasts between 4 weeks and several months. There may be 3-5 generations per year.

Control of the coffee berry borer is difficult because it spends most of its life inside the coffee berries. The most practical method involves removing and destroying infested berries which have fallen to the ground. However, this is extremely labour intensive. Several methods are also recommended to prevent beetles escaping from the harvested berries and re-infesting a plantation. These include keeping the berries in closed containers with a sticky substance on the inner lid surface, as well as treating the pulp residues after the pulping and washing process. Pesticides are also used and biological control agents are available. Several parasitoids have been widely released against the coffee berry borer (e.g. Cephalonomia stephanoderis, Prorops nasuta and Phymastichus coffea). However, their impact has been limited.

The adults are hairy and black with a slightly reddish prothorax. The female is around 2.5 mm long, the male 1.6 mm. Typically, there is a 10:1 ratio of females to males, apparently due to Wolbachia infections. Females can fly short distances, but males are apterous and mate inside the berries they have developed.