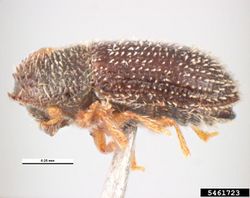 The genus contains around 200 species of bark beetles, found in tropical and subtropical regions. It contains the economically important coffee berry borer which attacks coffee berries. Most other species live in twigs but some also attack seeds and nuts.

The adults are very small, usually around 1-1½ mm long. The colour ranges from pale yellowish brown to black. Their surface is covered with erect and light coloured thick bristles. The antennae have a 3- to 5-segmented basal portion followed by an oval club with the first suture only partly septate. The 3rd tarsal segment is cylindrical.