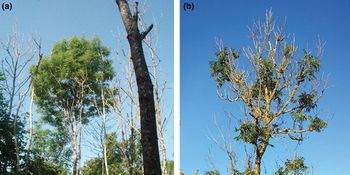 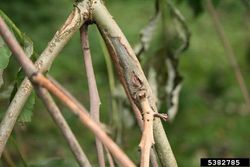 This fungus causes wilting and dying of ash trees, Fraxinus spp. (ash dieback) in Europe. The disease affects mainly European ash (Fraxinus excelsior). It was first noticed in the mid 1990's in Poland and subsequently spread to most parts of Europe. Between 2000 and 2010 the disease incidence increased dramatically in Europe. There are indications that it is also found in Japan, where it was named Lambertella albida.

The infected trees show wilting of the leaves as well as necrosis and cankers on the shoots, branches and stems, resulting in dieback. The fungus grows slowly on agar and also on the trees. Infections start on the leaves where symptoms appear after an incubation period of about 2 weeks. While many infected leaves fall off, the fungus can also reach the stem (and even the roots) through the petioles. White fruiting bodies, around 3 mm large, are formed in the summer. The ascospores are aseptate and about 15 x 4 µm large. The conidia are elongated, single-celled and cylindrical, 2.5-6 x 2-2.5 µm. Identification should be confirmed with DNA analysis. Dispersal takes place through the air via the ascospores.