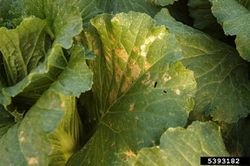 The oomycete is widespread in temperate regions and causes downy mildew diseases on Brassica crops, mainly during the seedling stage. It can be serious on cauliflower where parts of the surface and internal tissues of the head become black. Infected leaves show dark specks on the underside and some yellow, later also dark spots on the upper side. Infected seedlings often die and older plants are stunted and have a reduced yield/market value.

Sources of infection are mainly mycelia in plant debris from the previous season or in volunteer plants. Infections are frequent at cool and moist conditions. The oomycete spreads systemically in the plant and can produce conidia after a few days. For control, resistant cultivars, crop rotation and fungicides are used. Susceptible cultivars may need to be treated early in the season and sprayed repeatedly.

The species forms conidia as well as durable oospores. The latter mainly during crop senescence. Conidia are initially spherical and later egg-shaped, about 15-20 x 20-25 µm large. Oospores are thick-walled and spherical.