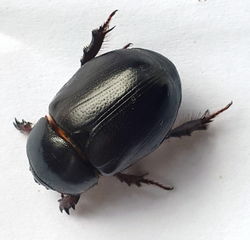 This beetle is native to southern Africa and has been introduced into Australia and New Zealand, where it has become a pest of maize, pastures and other crops like grapevine or potatoes. The adults typically damage the base of the plants just below the soil surface, causing wilting. Damage and feeding of the adults is seasonal. The larvae feed on organic matter and the roots. The population size varies according to environmental conditions like rainfall and soil type (Matthiessen, 1999).