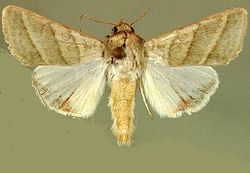 The moth is a serious pest of cotton and other crops in the Americas. The larvae mainly bore into the bolls, buds and developing fruits, but may also feed on the leaves. The damage to cotton can be very serious, and involves substantial yield losses and a reduction in fibre quality. The insect is less often a problem in other crops like vegetables. Control traditionally involves insecticides, but pesticide resistance is common and the impact on natural enemies might actually increase the damage. Apart from the use of genetically modified (Bt) crops, the early season removal of weeds is recommended since they can be alternate hosts. The life cycle from egg, through 5-7 larval instars, to adult lasts between 1-2 months, depending on the temperature. There are typically 4-5 generations per year in the southern U.S.A. The mature larvae drop to the ground for pupation and the pupae of the last generation overwinter.

Adults have a wingspan of 3-4 cm and are brownish or greenish grey. The forewing is crossed by 3 oblique dark bands. The hindwing is creamy white to light gray with a broad darker band just before the apical margin. The caterpillars have a variable colour and resemble those of the corn earworm (Helicoverpa zea), which also attacks cotton. Both species have numerous microscopic spines on the body. However, unlike in the corn earworm, these microspines also cover the tubercules (small protrusions) on the body surface.