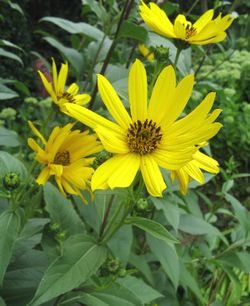 This species of sunflower is native to North America, but has been introduced into parts of Europe, Asia and several other regions. It is occasionally cultivated for its tubers (see the respective page in Wikipedia), even outside its native North America. Introduced populations can become invasive and agricultural weeds, infesting fields and suppressing crops through allelochemicals.