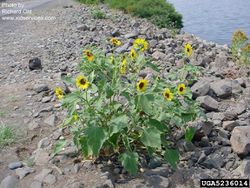 Common sunflower is native to North America, but introduced and grown as an oil crop and ornamental in many countries. Escapes from cultivation or accidental introductions have resulted in the species becoming naturalised, invasive and weedy in several regions, for example in southern European countries.

Wild sunflower populations can be an agricultural problem in several crops and pastures, including in its native North America. Affected crops also include cultivated sunflowers, where yield can be reduced by more than 50% (Casquero & Cantamutto, 2016). Further, in cultivated sunflowers there is a frequent exchange of genes between crop and H. annuus weeds, in both directions.