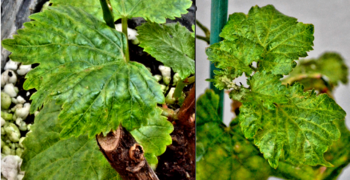 This virus is widely distributed in grapevine growing countries. It was first described in 2012 as a new virus in Italy from the grapevine cultivar Pinot gris. In the area from where it was discovered, grapevines had shown symptoms of stunting, leaf deformation and chlorotic mottling since 2003 and subsequent molecular studies suggested that the virus has been present in some eastern European countries earlier (Bertazzon et al., 2016). The presence of the virus has been confirmed in various countries in Europe, Asia and North America. Infections are not confined to the grapevine variety Pinot gris. Yield and quality of the grapes is reduced as a result of the infections.

Infected grapevines show symptoms during the beginning of the growing season, while during the summer leaves frequently appear symptomless. This recovery of grapevine plants can be demonstrated by experimental inoculation. Antiviral mechanisms in the grapevine plants, such as RNA silencing, might be involved in the phenomenon (Tarquini et al., 2019).