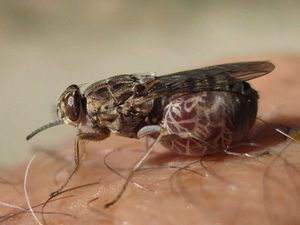 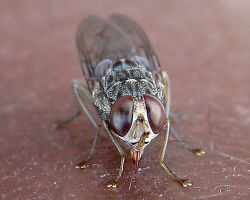 This parasitic fly is found in eastern Africa, from Mozambique north to some areas in Sudan, Ethiopia and Somalia. The habitats preferred by the fly are forests, woodland savannas and semiarid thickets. It is an important vector of animal trypanosomiasis but has been also implicated as a vector of some forms of human sleeping sickness (caused by Trypanosoma brucei rhodesiense) in Kenya and Uganda. It feeds mainly on ruminants (buffalo, bushbuck and cattle) but Suidae are also important hosts. Flies may have a high infection rate with Trypanosoma (often 20% or more).

Several trap types are suitable for monitoring G. pallidipes. Treating cattle regularly with pour-on insecticides has been used for control. Alternatively, the use of insecticide-impregnated traps has been found effective. Like for other tsetse flies, the release of sterile males is under development as a management tool.