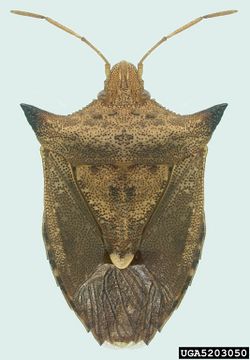 The stink bug is an important pest of soybean in subtropical parts of South America like southern Brazil. It feeds on the pods from their formation until ripening of the beans, reducing the oil content, quality and weight of the seeds. Yield reductions on soybean can reach 30%.

The bug was uncommon before 1970 but has become more and more abundant over the years. Apart from legumes it also attacks crops from the families of Solanaceae, Brassicaceae and Compositae. There are usually 4 generations per year in southern Brazil and the adults overwinter on the ground under leaf litter.