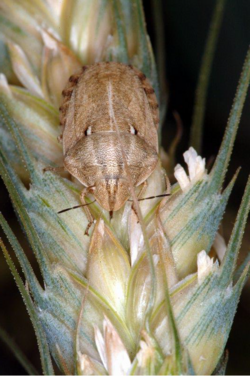 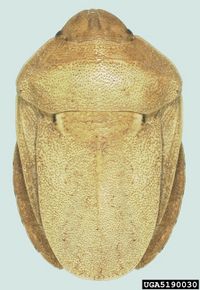 This species is the most important sunn pest. It attacks wheat and barley in the Black Sea region, western Asia and surrounding countries. The immature bugs suck on cereal leaves and stems, the last two instars on the maturing grain. Serious outbreaks lasting several years develop due to certain weather patterns when the ripening stage of the wheat coincides with the right development stage of the pest.

Insecticides are commonly used for control, but other methods like the release of egg parasitoids or setting up refuge stations to maintain natural enemies have been also tried. Per year, around US$ 40 million are spent on chemical control on this and other species of Eurygaster (estimates from 2002).

The live cycle from egg, through 5 nymphal stages, to adult lasts 1-2 months. There is only one generation per year. Adult insects migrate from the cereal fields to mountainous hibernation sites and back to cereal fields when temperatures rise. The adult is about 12 mm long and light brown in colour.