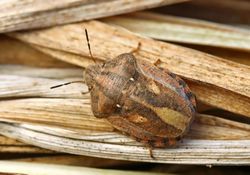 The species of this genus are serious pests of wheat, barley and some other cereals in south-eastern Europe and western Asia. They breed and feed on stems, leaves and the ripening cereal seeds. As part of the feeding activity proteolytic enzymes are injected into the plant. Early damage during the development of the grains causes the grain ripening to stop or affects the germination of the grains. Attacks during the later stages of the grain development results in poor quality grain. Populations can reach high densities, e.g. every 6-8 years, and infestations can result in total yield losses.

The adult bugs migrate to forest areas in autumn. The migration route can cover long distances, sometimes more than 100 km aided by wind, and reach high altitude areas. There they accumulate under certain plants and migrate back to the wheat field in the following spring. Management involves mainly the use of chemical pesticides and the yearly costs of treatments have been estimated at approximately US$ 40 million in 2002.