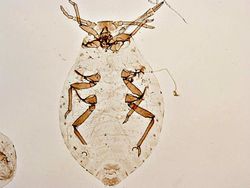 The aphid is a serious pest of apple, apparently native to eastern North America, where it uses elm trees as its primary host. It has been introduced into various apple-growing regions around the world. The aphid feeds on the young branches of apple, causing blisters, cankers, weakening of the trees and often secondary fungus infections. It also colonizes roots and injured parts of the bark where the aphid overwinters as nymphs.

There may be up to 10 parthogenetic generations per year with the females giving birth to live nymphs. Winged males and females also develop, disperse and produce eggs. The apterous female is about 2 mm long, brownish and hidden under woolly wax filaments. It contains a red liquid which becomes visible when squashed. The main natural enemy is the parasitoid Aphelinus mali which has been introduced into many regions and is one of the earliest examples of biological control. Other control methods involve the use of mineral oils or resistant rootstocks.

In eastern North America, the primary and overwintering host is elm, where it feeds on leaves and buds, causing leaf curling. After two wingless generations on elm in the spring, a winged generation follows, which migrates to a summer host like apple and then back to elm in autumn. Apparently, the summer hosts were originally Crataegus and Sorbus and it adapted to apple when this crop was introduced into North America. Even in eastern North America apple may now be colonized all year round.