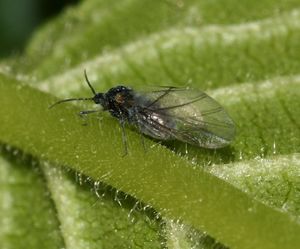 This genus contains around 50 species of woolly aphids. They often infest apple and pear trees, or elm trees and their relatives (family Ulmaceae). The genus is characterized by the wing-venation of the migrating forms as well as the woolly cover and the pore-like cornicles of the wingless forms.