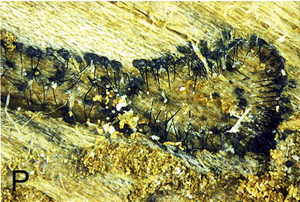 This fungus has been reported from Europe and eastern Asia and causes bark killing and sap stain in Norway spruce. It is transmitted by bark beetles like Ips typographus. The combined action of the fungus and the bark beetle can result in large scale tree mortality.