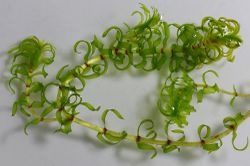 This aquatic weed is native to North America, but has spread to Europe (first record in Belgium in 1936) and parts of Asia. It is now widely distributed in Europe and a serious weed in shallow lakes, ponds and slow-moving rivers, disrupting human activities and suppressing native fresh-water flora and fauna.

E. nuttallii is very similar to Elodea canadensis, but has narrower and acutely pointed leaves. Both species spread mainly through stem fragments which drift off or are carried by birds. In Europe, male plants are uncommon and seeds are rarely produced.