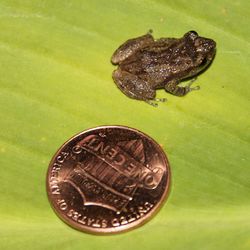 This tree frog is native to Puerto Rica and has been accidentally introduced into several other countries in Central America, as well as into Florida and Hawaii (U.S.). It feeds on a large variety of arthropods. In some areas of Hawaii, it has reached very high densities and is a threat to the endemic insect fauna there (Bernard & Mautz, 2016). Coqui frogs are common on ornamentals and apparently spread through the ornamental trade. Export of ornamentals from Hawaii is affected by the presence of E. coqui on the islands (Hara et al., 2010).

The frog grows up to a size of 3-5 cm. There is no tadpole stage and small froglets hatch from the eggs, about 6 mm long. Males make loud calls during the night, sounding like "co-qui".