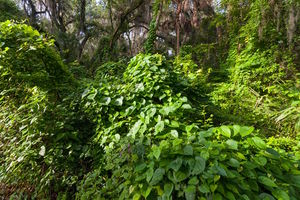 This plant is a tropical vine which is native to parts of Africa and Asia, but invasive in the Americas and parts of the Pacific. It has reached Florida, U.S. in 1905, apparently from Asia, and has spread to other parts of southern North America as well as to Central and South America, the Caribbean and a number of Pacific islands.

The vines can grow up to 20 m long, or more than 10 cm per day. The plant produces large, heart-shaped leaves. Tubers are small or missing and propagation is mainly through aerial bulbs or bulbils. These are vegetatively produced in leaf axils and do not involve the formation of flowers. In fact, flowers are uncommon, small and inconspicuous. New plants form through the germinating bulbils, rarely through sprouting tubers or seeds.

In Florida, bulbils have two forms and colours, dark brown with an irregular surface and light brown with a smooth skin. The tubers are poisonous, but the air potatoes are edible, provided they are cooked.