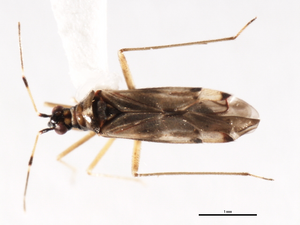 This bug is a zoophytophagous generalist predator, that is used in greenhouses in North America since the 1990s, and is available commercially there. Common target pests are whiteflies, thrips or spider mites on crops like tomatoes. It has been also experimentally used in the Netherlands and has been considered for wider release in Europe (Hatherly et al., 2008).

In the absence of prey, it feeds on the leaves of tomatoes, but only on tomato fruits when foliage is absent. Introducing an alternate host plant like mullein (Verbascum thapsus) as a greenhouse banker plant can increase the density of D. hesperus (Smith & Krey, 2019).