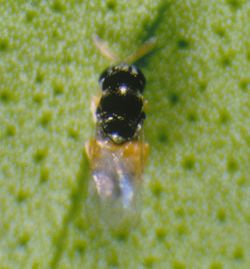 This wasp is native to southern Asia and a parasitoid of the Asian citrus psyllid (Diaphorina citri), co-occurring there with the more common and more efficient Tamarixia radiata.

While D. aligarhensis has been released in some countries against the psyllid, there are also records of it having established outside southern Asia without intentional releases (e.g. see Matsunaga, 2014). On the other hand, a large-scale release program in Florida starting in 2000 has apparently not resulted in it becoming established there, possibly due to too much competition with T. radiata (Rohrig et al., 2012).