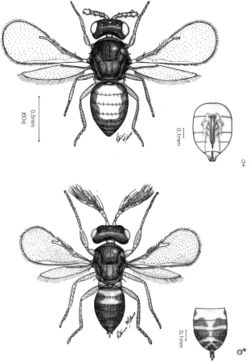 The wasp is an important parasitoid of the Asian citrus psyllid (Diaphorina citri) and is native to some parts of Asia. It has been successfully introduced into several countries as a biological control agent against this pest, e.g. into south-eastern North America around 2000. In some countries, it was apparently inadvertently introduced. The current distribution matches approximately that of its host. It has a high host specificity and few non-target effects can be expected from its release.

The adult wasps feed on nectar and females also feed on psyllid nymphs. By feeding and parasitisation a female kills up to 500 nymphs during its life. T. radiata is an idiobiont ectoparasitoid (the host is paralysed and stops its development). It develops underneath a psyllid nymph sucking its blood and goes through 4 larval stages. The total development time from egg to adult takes 2-3 weeks.

The adult is black with lighter legs and around 1 mm long. Males and females have a similar appearance with few morphological differences apart from the structure of the antennae.