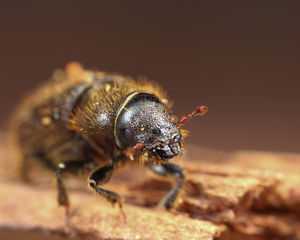 This beetle is one of several Dendroctonus species that are serious conifer pests in North America. It feeds on the phloem and infests mainly spruce, pine and fir trees. However, it causes the greatest damage to spruce trees, especially Engelmann spruce (Picea engelmannii), and can be responsible for the mortality of whole spruce stands. During an outbreak in Alaska around 1996, more than 500,000 ha of spruce stands were infested and around 30 million mature trees were killed. Such outbreaks are sporadic and at low populations densities, the beetle breeds mainly in weakened or felled trees and causes little damage.

Females enter the trees first, attract a male and introduce a symbiotic fungus that makes the wood suitable for breeding. The fungus also helps the beetle to overcome the defences of the trees. The life cycle typically lasts 2 years but may extend over 3 years or be as short as 1 year. Hibernation can take place during the larval as well as the adult stage.