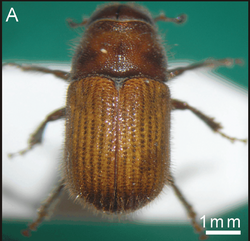 This bark beetle attacks pine trees in Central America. Mainly seedlings below 3 m in height are infested. Females and males colonize the host tree together and excavate galleries. Unlike other Dendroctonus species that attack trees in large numbers, only one or two pairs attack an individual tree. The larvae live gregariously and eventually migrate to the root system where they pupate. There is one generation per year.