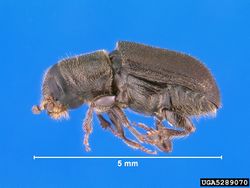 The beetle is a serious pest of ponderosa pines (Pinus ponderosa) in western North America and its range coincides roughly with the distribution of that pine species. It carries two symbiotic fungi which grow inside the egg galleries constructed by the beetle. The developing larvae feed on the fungi as well as on the phloem and bark of the host tree. Following the emission of an aggregation pheromone by the first females, additional beetles are attracted and the mass-attacks overcome the defenses of the host trees and lead to tree mortality.

For details see the respective page in the BugwoodWiki.