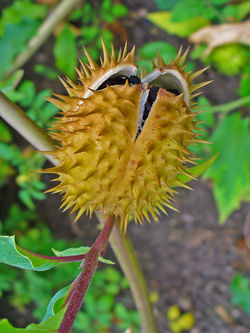 This weed appears to be native to the Americas, where it has been used since ancient times as a medicinal plant. It probably spread to Europe after the discovery of America and now has a world-wide distribution. It is toxic and often invasive, growing in disturbed areas and agricultural fields. Affected crops include maize, cotton and vegetables (e.g. see Scott et al., 200 or Cavero et al., 2000). D. stramonium produces several alkaloids that have neurological effects.

The plant grows to height 1 to 1½ m and forms small bushes, with irregularly shaped, toothed leaves. The flowers are trumpet-shaped and whitish. The fruits are egg-like, spiny and around 5 cm long. They are divided into 4 chambers, each with dozens of small, black seeds. The seeds remain viable in the soil for more than 30 years.