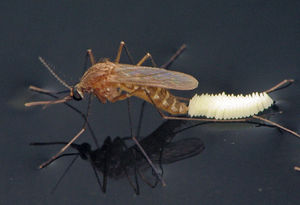 There is evidence that this species has evolved in Africa, but it is now widely distributed in the tropics and subtropics due to unintentional introductions by humans. It is closely related to Culex pipiens and both species interbreed in some non-indigenous areas (giving the appearance that both are subspecies). It feeds predominantly on birds and mammals and transmits various diseases, like West Nile virus, Japanese encephalitis (JE), St. Louis encephalitis and bancroftian (or lymphatic) filariasis.

It breeds in any type of standing water, including containers. The life cycle from egg, over 4 larval stages, to mature adult might be as short as 2 weeks under favorable conditions. The adults are about 4 mm long, brown with some parts darker brown. The abdomen has lighter, rounded bands.