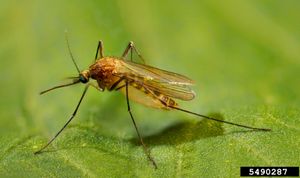 This is an important and widely distributed mosquito species which is common in temperate regions. It has a wide host range and feeds on birds, domestic animals, humans and other mammals. C. pipiens transmits various diseases like the West Nile virus. It bites at dusk or during the night and breeds mainly in temporary pools, in containers or in other stagnant, often polluted water. The development from egg to adult takes around 3 weeks, depending on the temperature. Apart from taking blood meals it may also feed on plant juices. The males feed only on flowers.

Adults are about 5 mm long and light brown without distinctive markings. The female has a whitish dorsal band at the base of each abdominal segment. The males can be recognized by their feathery antennae. Culex pipiens is closely related to Culex quinquefasciatus which is considered to be a subspecies or biotype of Culex pipiens by some authors.

Culex molestus is a variant of Culex pipiens and the names "Culex pipiens pipiens biotype molestus" or "Culex pipiens molestus" can be used. The molestus form can show differences to the typical pipiens form like subterranean habitats, lack of diapause, and preference for humans and other mammals. However, both forms interbreed if they occur together (e.g. see Osorio et al., 2014).

Culex pallens is also often considered to be a member of the Culex pipiens complex or assemblage but has no valid taxonomic status.