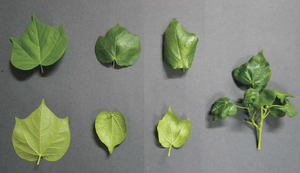 The virus is associated with the cotton blue disease in Africa, the Americas and South-East Asia. The disease can cause yield losses of up to 80% (Avelar et al., 2019). The symptoms include leaf rolling, stunting and intensive greening of the foliage. It is transmitted by the aphid Aphis gossypii.

The disease is managed by planting resistant cultivars, but since 2006 resistance breaking forms of the virus have appeared (e.g. see da Silva et al., 2015).